​I was back in Seattle during the first week of October and decided to give Olympic National Park another go since my visit in June was a bust. Turns out this time of year is generally dry in the Pacific Northwest, so it worked out well.

On Saturday morning I left my hotel and drove up to Edmonds, just north of Seattle, and rolled up perfectly timed to catch the ferry across Puget Sound to Kingston. I had a spot right on the side of the ferry so had a nice view for the 30 minute crossing. From there it was about another hour drive out to the park. The ferry saved me about an hour and a half that I would have had to have driven south around the sound and across the Tacoma narrows – which is what I did last time.
It was an absolutely beautiful day, in the mid-sixties and cloudless! I drove up to the Hurricane Ridge visitor center which I had also done back in June. This time, the view was absolutely stunning. I made the 3 mile round trip hike from near the visitor center up to Hurricane Hill which overlooks the park to the south and the town of Port Angeles on the coast to the north. Well worth the effort.
After this hike I headed back down the wonderfully twisty mountain road and grabbed lunch in Port Angeles. Then it was on to the Elwha section of the park which I had not previously visited. Unfortunately, the main road was closed due to some serious construction – the Glines Canyon Dam is currently being removed and is the nation’s largest dam removal project currently under way. So I took the Whiskey Bend Road instead. This is a single lane dirt road that heads up to a trailhead.
I took the trail down into Rica Canyon which is just above the dam removal area. It was about a 4 mile hike that led down nearly to river level. Some very nice views overlooking the canyon. Finally down at the river I made it out to Goblin Gates. At this point the river makes a nearly right-angle turn and cuts into the mountain. It is this cut that is called Goblin Gates and it is spectacular – though probably more so from the other side of the river. 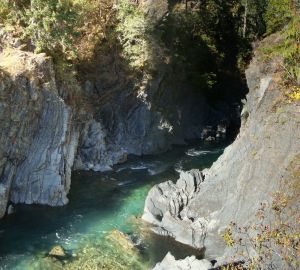 After making it back up the trail from the river level it was about 5 o’clock and I called it a day and headed for my hotel in Sequim – pronounced squim for some reason. Got a good night’s sleep and then headed to the airport Sunday morning and was home about 8 o’clock. All in all a pretty good weekend in the park!