​So last night I called an audible and decided that this would be my last night in the central area of the park. Since I didn’t have any activities planned in Zion canyon for Friday I opted to check out of the campground this morning and instead spend some of my Hampton points tonight and relax.

So after getting breakfast made and camp packed up I finally boarded a shuttle to Weeping Rock at 10 o’clock. Was on the trail up into Hidden Canyon by about 10:30. This was only about a 3.5 mile round trip but the first mile was pretty much straight up. About 2/3 of the way up I heard some commotion a couple of switchbacks above me. I wasn’t able to get my camera to the ready quick enough to capture the bighorn sheep ram jumping up the slope so there’s no evidence but it was pretty cool. There were three guys on the trail and they said at first he had headed straight at them! It’s nearing the end of the rut season for the bighorns so you definitely don’t want to be on their bad side…

Once reaching the top of the climb it was then a matter of following the trail along the ledges around and into Hidden Canyon. The park service had again placed some chains for hand holds. I actually think these are a bad idea in most cases. It seems to give people who perhaps shouldn’t be up there in the first place some false security. To me it felt better to keep a hand in the rock because the chains are slack and if you’re falling outwards you may not be able to hold onto the chain. Better to have a hand on the rock and be leaning towards it. But what do I know? 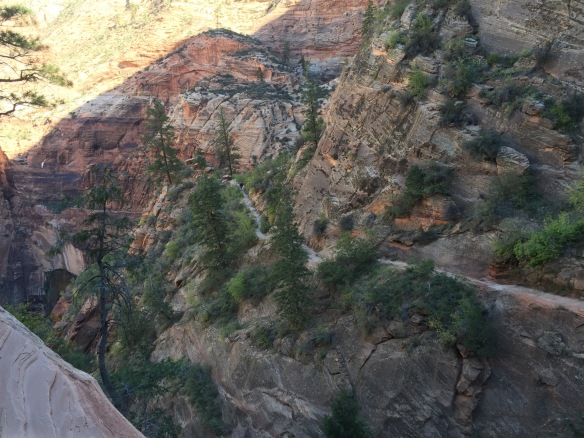 Anyway after reaching the entrance to the canyon the maintained section of the trail ends. The options are either just turn back or head into the canyon which requires a bit of scrambling over debris in the canyon; rocks, boulders and trees. The payoff is a little arch along the canyon wall. Nothing spectacular but it was fun to climb over stuff!

From there I headed up to the Temple of Sinewava which is at the upper end of the canyon and is the start of the Riverwalk and entrance to the Narrows “trail”. I walked along the Riverwalk as there are some great views but had decided not to do the Narrows hike. Perhaps I’ll make it back someday to do that one. There are so many people heading in there that it just seems too crowded – nothing worse than a crowd on a trail as far as I’m concerned.

By the time I finished there it was about 4:30. So after the ~40 minute shuttle ride to the visitor center and walk to the car I finally made it to the hotel about 5:30. Got cleaned up and headed out for dinner. The town of Springdale exists pretty much to serve the tourists, so every place was pretty busy. The third place I hit, The Flying Monkey, I was able to get a table without waiting. It wasn’t great but at least I didn’t have to wait.

Back to the hotel for a good nights sleep. Tomorrow I’m going to spend driving to a couple of the more remote areas of the park before heading back to Vegas for my red-eye flight home.