​Day 2 started around 6 am (Central Time) and I finally crawled out of the tent around 6:30. I had a relaxing breakfast of coffee and oatmeal and watched as the few other people in the campground hit the trail – clearly operating on Eastern Time…

By the time I had my gear packed and ready to go it was 8:30 which I think is a perfectly reasonable time to hit the trail while on vacation.  Besides today was slated as my shortest hiking day – just 5.5 miles, so there was really no rush.

I made the approximately 0.4 mile climb up from Island Mine Campground back up to the Greenstone Ridge and continued my northeasterly hike.  Once back on the ridge I had 4.8 miles to go to the Lake Desor junction.

Trail heading out of Island Mine Campground

Yesterday and this morning have been spent hiking mostly under the forest canopy and so it has been pleasantly cool with just some dappled sunlight making it’s way to the ground.  Perfect for hiking!  Especially given that yesterday and day are mostly uphill ascending the ridge – not steep but a steady climb.  Even better is the fact the bugs have really been very mild so far – only around camp in the evening did I need to use a little bug spray.

And the best part of hiking at this time of the summer is that the berries are ripe – in fact the ranger said yesterday that all of the varieties are ripening at the same time this season which is unusual but due to the long spring.  She said that anything that looks like a raspberry is safe to eat and are most commonly thimbleberries.  There are also blueberries and a range of others.  In my haste to get on the trail yesterday I forgot to take a look at the photos of the edible varieties.  In any case, the thimbleberries are plentiful along the trail and you rarely have to reach far to grab a few;-)

At around 11 o’clock after two and a half hours on the trail I was ready for lunch and to get the pack off my back for a little while so started looking for a spot to break.  A short time later I could finally see a clearing in the trees and the next thing I knew I was out in a small clearing along the ridge with an overlook on part of Lake Desor and Superior in the distance.  The perfect spot for lunch!

I ate my lunch and rested for about 30-45 minutes and just enjoyed being in the sun for a short while as I could see the trail headed straight back into the trees.  The clearing was only about 60 feet long with about 20 feet on either side of the trail.  But it was a short rest of the way to the campground.  After about 45 minutes I reached the junction that would take me down to the South Lake Desor campground, 0.3 miles.  I was in the campground at around 12:45.

I hadn’t seen a soul on the trail the entire morning but upon reaching the campground I saw two other groups and a third would arrive later in the evening to take the last of the 4 sites in my area.  There were several more individual and group sites in an adjacent area of the campground.  After dropping my pack I had no desire to scout the other areas. After a short rest I scrambled down the “trail” to the lake to filter some water for dinner and tomorrow.  Carrying my water filter and various bottles was a bit of a challenge given how steep it was, but I made it without injury, but was a bit disappointed.  I had visions of a nice beach to maybe walk out and cool my toes.  However, what I got was a clearing in the trees about four feet wide and nothing but boulders…  Oh well, still a nice view of the lake and I got my water filled.

The rest of the evening was just relaxation and making dinner then crawled into the tent around 8 as I was fairly tired despite the short trail day.  Was again hoping to catch some of the Perseid meteor shower as tonight was the last best night for them.  While I had a clear view of the sky from my campground the clouds rolled in and so it was not to be.  I fell asleep early anyway… 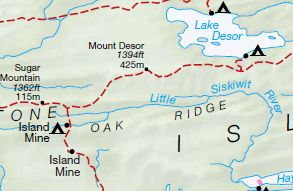