Well it ended up raining a good bit overnight. The constant pattering on the tent made it hard to get to sleep. Woke up about 6:30, broke camp, showered and opted for the buffet breakfast at the camp kitchen vs. cooking something myself. Was on the road about 8:30.

Plan was to drive to Casper, WY and find someplace to stay. I planned a stop at Scotts Bluff which is a National Monument to the pioneers on the Oregon Trail. It was one of the best known landmarks in the area. I drove to the top and stretched my legs on the short trail. Then back in the car. 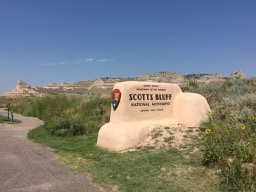 I had been mulling over what to do for the evening; park at a rest stop, or go to a late movie and perhaps park at a Wal-Mart when I passed Glendo, WY and saw a little tent city. I stopped at a rest area about 15 miles north where a bunch of people had already setup camp as well as another little tent city a short distance down the hill. I checked the map and the path of totality goes right over Glendo and the forecast looks good there as well. So I called another audible and abandoned the Casper option.

I drove back down the interstate to Glendo and got a spot for the night. 20 bucks to just sleep in the car, 50 bucks to pitch a tent. I’m sleeping in my tent. Was all settled in about 5 pm. Should be able to get some sleep tonight and be ready for the big event in the morning. And staying here means an hour less driving tomorrow!

Now time to make some dinner!