Well it ended up raining a good bit overnight. The constant pattering on the tent made it hard to get to sleep. Woke up about 6:30, broke camp, showered and opted for the buffet breakfast at the camp kitchen vs. cooking something myself. Was on the road about 8:30.

Plan was to drive to Casper, WY and find someplace to stay. I planned a stop at Scotts Bluff which is a National Monument to the pioneers on the Oregon Trail. It was one of the best known landmarks in the area. I drove to the top and stretched my legs on the short trail. Then back in the car.

I had been mulling over what to do for the evening; park at a rest stop, or go to a late movie and perhaps park at a Wal-Mart when I passed Glendo, WY and saw a little tent city. I stopped at a rest area about 15 miles north where a bunch of people had already setup camp as well as another little tent city a short distance down the hill. I checked the map and the path of totality goes right over Glendo and the forecast looks good there as well. So I called another audible and abandoned the Casper option.

I drove back down the interstate to Glendo and got a spot for the night. 20 bucks to just sleep in the car, 50 bucks to pitch a tent. I’m sleeping in my tent. Was all settled in about 5 pm. Should be able to get some sleep tonight and be ready for the big event in the morning. And staying here means an hour less driving tomorrow!

Now time to make some dinner!

After monitoring the weather for the Great American Eclipse of 2017, I called an audible and decided to head towards Casper, WY. My original plan was to be near southern Illinois or southeast Missouri where the greatest duration of totality will occur, however the forecast for that area looks to be cloudy and/or rainy – less than ideal for eclipse viewing of course.

The weather in Casper looks to be perfect so this morning I loaded up the car, after returning from a business trip about midnight, and headed out about 10:30. I’m driving the Edge instead of the Solstice on this trip as I may be forced to sleep in the back tomorrow night. Hotels and campgrounds are booked for hundreds of miles around Casper. Such are the hazards of winging things for such an historic event. Only hope for a campsite is a forest service campground which is small and first come first served.

I made it is far as the Grand Island KOA in Nebraska where I last spent a night in 2012 on another eclipse related trip. The path of totality will actually pass directly over this campground, however the forecast calls for clouds – no good, so I’ll be moving on in the morning.

It’s a pleasant evening here with fireflies flickering around the campsite. There are some clouds moving in and a few flashes of lighting. Forecast calls for some overnight rain but I don’t think it will be too bad.

Another 500 miles to Casper tomorrow. Hope to be on the road fairly early so I can get there, scope out a viewing location for Monday and oh yeah, find a place to sleep that doesn’t involve the car…

There are a lot of Canadians around. 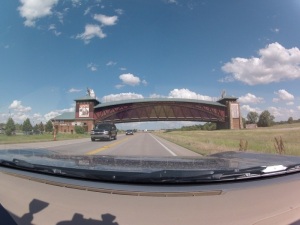 The past two days have simply been driving days.  Yesterday was from Evanston, WY to Cheyenne and today took me to Omaha.  There was a bit of nice scenery coming through the mountains in WY yesterday but nothing like the sights driving I-70 through Colorado.  The only bit of mild excitement was when I ran over a chunk of tire just west of Lincoln this afternoon…

The passenger side wheel well was knocked loose and I found the marker light hanging buy it’s cabling.  I was able to pop those things back into place.  By the time I reached Omaha the tire was fairly flat.  I re-inflated it with the compressor and it seemed to be holding, but we’ll see in the morning.  If it’s low in the morning then I’ll use the sealant that I have and limp over to a tire store…

And for anyone whos ever wondered just what its like to drive across Nebraska, enjoy the following video.

So I was planning to leave home at 7am on Saturday – a little ambitious given that I had a few things to get ready.  8 o’clock would have been fine as well.  In any case as I was loading up – I never had a chance to fit-check everything – I realized that my telescope case takes up way too much space.  In the end, I ended up pulling the passenger seat as I did on my 2006 road trip.  Oh well, I was on the road at 9:30.

Programmed my GPS to take the shortest route – which is not the quickest as it literally takes the shortest mileage route.  This is actually kind of nice as you end up taking the smaller state highways and it’s a bit more scenic.  The downside is of course it’s slower – but the GPS showed only an hour difference, what the heck!  Well, there are also some issues with construction and detours…  That extra hour was turning into about two hours – given my late departure this was making for a long day.

Somewhere in southwestern MN just above the IA border I decided to go back to the fastest route.  This put me on I-29 down to Omaha and the I-76 over to Doniphan where I was spending the night.  Maybe not as scenic, but better none the less.  I got to my campground a little after 7pm.  Got setup, made dinner and crashed.

Sunday morning I was on the road again about 9:30 and arrived at my campground near Golden, CO a little after 4pm MT – another long day but at least I have the extra hour of sunlight to work with.  Speaking of, time to go make some dinner!

On to Utah tomorrow!