​I was greeted in Hilo last night with a light rain shower. Several heavy showers woke me up this morning. Another brief, light shower welcomed me back to the airport this afternoon.

While at the park today it was nothing but blue skies! And wind. A lot of wind. Really, it never stopped. Which was probably a good thing as it would have been unbearable walking around on all that black lava rock.

About half of the crater rim drive is closed due to the current eruption causing excessively high levels of sulfur dioxide gas. But the views from the open part were enough to enjoy. 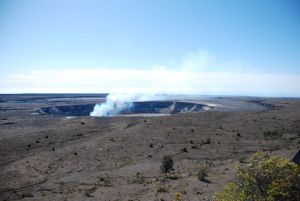 From there I headed down the “Chain of Craters Road” which descends from the caldera rim of Kilauea down to the coast. It’s a stunning view once the ocean comes into view and you make your way down the switchback road.

The road ends, technically it’s still there but under a bit of lava, at the lava flow first created in 1983 and continuing to this day. From here you can hoof it a ways over the lava to get a distant view if the steam plume being created as fresh lava is flowing into the sea. Pretty cool (or hot?)!

All in all, well worth the side trip. As always however, a couple of days would be better in order fully explore the park. Guess I’ll have to make a return someday.

Now it’s off to Kauai!