Shortly after the total eclipse concluded it was time to hit the road.  Watching the moon continue its path across the sun is somewhat anti-climatic and not all that exciting.  My plan was to retrace my route and spend the night in Council Bluffs, IA where I had a reservation at a Hampton Inn.  I was in my car and queued up to leave at 12:10 p.m.

It would take an hour to travel about 100 yards out of the field that I had spent the night in.  It took another hour to complete the 1.2 miles out of Glendo.  There is only one path ultimately leading out of Glendo onto I-25 and all of the thousands of people in the area had to make it through this funnel.  To further exacerbate the issue the vast majority of the people were from the Denver area (or Colorado in general) and needed to head south.  The interstate was already moving at a crawl with people coming out of Casper so it was difficult for anyone to move.

My original plan was to take I-25 south back to I-80 to take me across Nebraska.  I would have actually joined up with US-26 which I had taken from Scotts Bluff yesterday.  That maybe 20 mile stretch could have taken hours based on this report.  When reaching the Interstate entrance I therefore decided to abandon that plan and would instead take I-25 North, then take Wyoming Highway 59 to Gillette where I could pick up I-90 and head east across South Dakota.  I think I made the right choice as I made my way north, the southbound lanes were bumper to bumper, stop and go, for 14 miles with steady traffic coming out of Casper for the 28 miles until I exited onto Hwy 59.  Yikes!

I was now completely winging it.  Should I stop somewhere and camp or get a hotel, or just keep driving.  I considered stopping in the Black Hills, but it was only about 6 p.m. and that would mean not getting home until late on Tuesday.  I kept driving.  Was going strong all the way to Sioux Falls which I reached about 1 a.m.  Made it another two hours, to Blue Earth, when I decided I had to stop and rest.  Pulled into a rest area and got settled into the back seat.  Didn’t sleep real well, but must have got a little bit as my alarm woke me at 6 a.m.  I felt considerably better and got behind the wheel again – only two hours to go.

Stopped in Faribault for some breakfast and to also make sure I didn’t end up in morning rush hour traffic.  After breakfast it was back on the road for the final hour.  Pulled into my driveway a little after 9 a.m.  What a trip!  Have to say I’d do it all over again!

So there are two down sides to the location that I ended up at overnight.  One – there are train tracks just to the west of the town and there is a constant flow of trains coming out of the Thunder Basin (Coal Creek Mine).  My neighbor heard that they come through every 20 minutes – not sure if they were that frequent but whatever, they blow their horns coming through town.  All.  Night.  Long…  Two, there is only one route to the interstate and I’ve no idea how many thousands of people saw the great opportunity I did yesterday…

Of course, the most important points are that the path of the eclipse will go directly overhead and provide 2 minutes 28 seconds of totality and the weather is forecast as clear.  So I’ll accept the down sides happily!

Anyway, I rolled out of my tent shortly after sunrise at about 6.  The weather forecast had not failed me.  There were some light clouds visible to the east with the rising sun, but otherwise overhead and to the west was nothing but clear blue sky.  Made some coffee and oatmeal and got a little reading in while waiting for the event to begin.

It was a beautiful morning in the Black Hills.  I woke up at 6 intending to break camp and get an early start – but I fell asleep.  Not for too long though, I was up at 7 in time to get to the All You Could Eat pancakes before the crowd converged – I don’t know how people can eat more than the first serving – three big cakes!  They had a neat contraption for dispensing 5 equally sized pancakes onto the griddle at once, so they must be able to really go when they need to.

Anyway, I did get on the road by about 8:30, which was earlier than planned so that was nice.  Also, it was cool enough and it wasn’t too windy yet so I finally got to drop the top on the convertible.  Sweet!!  I did have to put it back up about 11 o’clock though, as it was just getting too hot and windy, it was again in the 90s through Wyoming and into CO.  It’s supposed to be a bit cooler here the next couple days – time will tell.  It wasn’t on the agenda, but as I drove right past it, I stopped at the Crazy Horse Monument as you can surmise from the previous posting.  I just wanted the picture though, so I didn’t actually spend any time at the visitor center.  I really wonder if it will ever get finished, it doesn’t look any different to me now then the first time I was there – about 20 years ago.  I hope they do finish it and as intended since it would definitely be impressive.

As this day was only planned to get me from Mt Rushmore to Estes Park in Colorado, I didn’t make any other stops along the way except for gas and other necessities.  I took some video clips of the highway along the way just to show you the exciting scenery in Wyoming.  Also there was a big fire near Lost Springs, WY – probably a grass fire.  I took a few clips of that as well.  I’ll  try to post those today.  As I have power at my campsite here in CO, I’ll also be posting more pictures from yesterday on the WRT2006 page later tonight.  I’m just relaxing at the camp tonight as it was a long day of driving.

Bonus picture of the day.

Worldwide delivery in 30 minutes or less!

Day two began early – I was awake at 5 a.m. in anticipation of the shuttle landing, thinking it was at about 5:30.  Turns out it wasn’t until 7:15. Oh well, t was a beautiful morning.  The landing was exciting as usual.  Didn’t sleep well anyway as it was still about 90 degrees when I crawled into the tent and then the wind blew all night long, though it didn’t seem to cool things off any.

I rolled out of the campground about 9 o’clock and discovered that the Badlands entrance was just a few miles from my scheduled stop at the Minuteman site.  Since my tour wasn’t schedule until 1:30, it was the perfect way to spend the morning.  I took a leisurely drive through the Badlands park, stopping to take some pictures.  It’s an amazing landscape.  I can’t image being one of those early pioneers running into that mess in a covered wagon.

The Bandlands loop drive (westbound) ends up at Wall, SD.  I stopped at Wall Drug, but it was pretty much as I remembered, so I don’t think I spent 5 minutes there.  From there it was a bit of a backtrack, only 20 miles, to the Missile Site.  It was pretty interesting, but I think it’s clear what spending 24 hours at a time locked in a box prepared to destroy the world does to a person.  One of the Park Service Rangers who led the tour was a former Missileer, and he was just a bit odd.  Not that there’s anything wrong with that!

I pulled into the Mt. Rushmore campground about 6 and have my campsite set up, so I’m going to grab a bite to eat and then think I’ll head over to Mt. Rushmore – I think they still light it up at night. 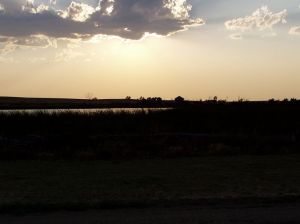 Evening on the prairie at Midland, SD.